We are full of mangoes!

We had our first day off on Sunday and we definitely needed it. We’ve been going flat out since Diego arrived and between Christian’s persistent cough and my sneezing our room sounds like a hospital ward. Diego is now, of course, feeling much better and is his sparkling self. Shooting in the slum is surprisingly tiring. It’s very dusty and the sun sucks the energy out of you. Fortunately we are eating well with plenty of fresh fruit (including amazing mangoes which up to this point in my life I have never really liked) and haven’t had any junk food since we arrived (well except Diego and has nightly chocolate bedtime snack).

We conducted our first interviews this week and I can tell it’s been a while since I’ve directed. Also the only directing I have done up to this point has been for short films and commercials so it’s a different skill set. My brain is thinking “get different shot sizes”, “did you get the reverses?” and “how was the performance?” but for a doco your coverage and way of shooting is different. Even the way you tell a story in a doco is different. Also I’m acting as the director and interviewer. The first interview I was too concerned about getting all the information I needed and didn’t control the interview enough. I knew the person we were interviewing was nervous and in hindsight I should have done more to make him feel comfortable. Fortunately we have enough time to get the interview again. We’ve just done the second interview and it’s gone much better. 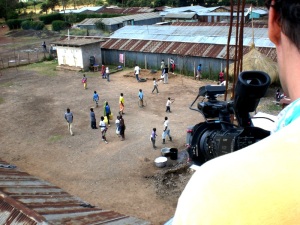 One thing I don’t have to worry about is the way it looks. I’ve worked with Diego plenty of times and I know I can trust him to give me amazing framing & composition, interesting camera set ups, good coverage and just to make it look damn good. I haven’t worked that much with Christian but he too is shooting some good footage so I can really focus on telling my story.

We’ve shot some more glidecam footage and its look FANTASTIC!  Christian and I strapped on the rig on Sunday and it’s bloody hard. We were exhausted after a few minutes. Diego has had to negotiate muddy slum roads and it still looks very smooth. It’s a credit to his skills, me thinks. We’ve all been taking turns on camera and sound and we are now a pretty slick unit and very much in rhythm. I think I’m most proud of the fact that there is no ego in any of us and we are happy to do what ever is necessary. 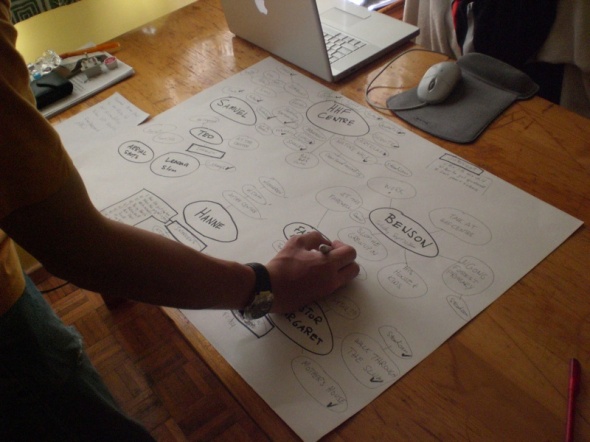 To help figure out my story, on Diego’s suggestion, we’ve created a mind map diagram. It’s been helpful as a tool to visual my story and also act as a checklist to make sure I get everything I need. Every night we capture the footage, which is great because I get to see what we’ve shot and how it’s looking. Christian has Colour on his computer and we’ve been playing around with grading the footage. He’s a good grader and we’ve been able to grade the footage so that it looks very filmic and pretty damn sexy too.

We finally got Hanne in action in the slum and she did not disappoint. She is an amazing combination of the disciplinarian and the loving mother. We’ve had some emotional moments in the slum. There is such happiness and joy at the centre but also it is such a tough life. Hanne has to be tough and to some 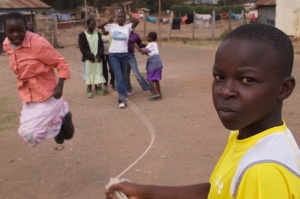 it might appear she is too hard but to make things work in the slum it is absolutely the way it has to be. When you spend time in a slum like Lenana you do have to throw out your pre-conceived notions from the western world. Also, the young boy, Samuel, who I want to feature in the documentary is coming out  of shell and you can tell he loves the camera.

So still plenty to do but we are really enjoying this experience.

Until next time
Riyad, Diego & Christian