First of all thank you to all of you who have been posting comments on the website or sending them to us on email. I know I keep thanking you for your support but they are not just words. It really is an amazing feeling to know that you are sharing this experience with us. Please keep them coming!

This week has been amazing for us. Without a doubt the absolute highlight was shooting from a six seater 206 Cessna. Ted, Hanne’s husband, recently obtained his pilot’s licence in Canada and has been flying a bit here in Kenya. When we arrived Ted got to talking about some of his flights and I asked whether we could go up with him to do some aerial shots. Ted has recently met this fantastic guy named Alexis. Alexis is one of these people who truly loves life and his energy is infectious. Last year he flew over South America in a small open cockpit plane. His stories from that trip are just mind boggling. Alexis is also a fellow filmmaker and did aerial photography for the incredible documentary “Flying with Birds”. The three of us, particularly Diego, bonded with him immediately. On Wednesday myself, Diego, Christian, Ted and Alexis took off from Wilson Airport for a thirty minute flight. We took the back door off 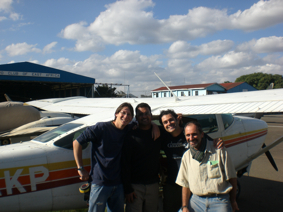 and Diego was harnessed in. Christian and I sat in normal seats just buckled in. Diego is an adventurer and flies regularly in hot air balloons and has even hung 20 feet out of the basket. Chrisitian has flown plenty of times in small planes but for me this was huge. I have no problem flying whatsoever but I’m not great with heights so I thought flying in a tiny plane would freak me out. But flying with Alexis was amazing. He is just an absolute natural and I totally enjoyed the experience (okay granted I was holding on pretty tight to the hand strap but hey I still loved it). It was a once in a lifetime experience and we did five passes by the slum and the project. It was a huge day for the kids in the project and the next day a few of them said it made them feel like kings. For the film itself it is going to add an amazing amount of production value to the project.

Hanne and Ted have been fantastic since we’ve arrived. In a way they are our surrogate parents and have totally opened up the project for us. This is an amazing opportunity for us but also for them and the project. I think for all of us this experience is going to change us. I don’t think its possible to do something like this and not be effected. I know that Diego’s views on the world of NGO’s, fundraising and charities has changed. Personally I find that my emotions are very much on the surface and I feel raw at times. There are so many moments of happiness and joy but there is so much hardship and heartbreak too. Hanne is just amazing at dealing with this. I know that it breaks her heart sometimes but she also knows that she isn’t tough then nothing will get done. 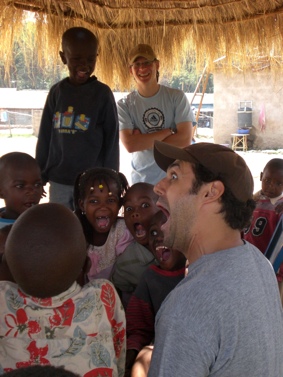 The three of us have been talking a lot about the documentary and the funny thing is we know that no matter how the doco turns out we know that we are going to be criticized. We know that Hanne is going to be criticized. When I originally had the idea for this doco I canvassed quite a few people for their feedback. More then one person said “oh its another story about white people showing African’s how to lead their lives.” I was surprised by this because it only seemed to come from middle class Western people. Mind you not all “Westerners” had this response and I don’t want to paint all “Westerners” with the same brush but when I did have this response it was from people in the West and never from people from developing countries. My family is from South Africa and has been there for over 150 years. Most of my family still live in South Africa and I have a strong sense of connection to Africa. Christian has spent most of his life in Eastern Africa and has seen some terrible things while here. For only being twenty-three he is extremely pragmatic about what works and what doesn’t work. So in one way or another we feel it qualifies us to give an opinion on the project. Our response is that we don’t care what skin colour someone is as long as someone is doing something. Sure Hanne maybe the mzungu who appears to be hard on her staff and demanding of the children but the fact is she is getting things done. It is hard to explain in words just how terribly difficult and hard things are in the slum. Everyone we talk to has tragedy in their lives. Our Western concepts or ideas simply do not work. While others may argue about the ethics and the moral dilmenas there are now one hundred children with an opportunity for a life. Middle class guilt may cause some internal conflict for some but the most important thing is the children.

There is so much more that we want to talk about in terms of the politics and the corruption here but I think that’s best left until we have left and had some time to reflect. So now just one week to go. The time has just flown by. Anyway continue to send your good thoughts.

This entry was posted on February 8, 2009 by Riyad. It was filed under BLOG .