It’s been quite some time since I last wrote, which I apologise for, but I’ve been waiting for some good or exciting news to share. Unfortunately there hasn’t been any news with the documentary for a few months.

The documentary was finished, with all the bells and whistles, earlier this year. It took almost two years to finish it in post. That wasn’t the plan but that is just good old independent film making. When it was completed and I watched it for the first time with the credits, the music and sound it was incredible gratifying. The plan was to get it out into film festivals but then my life was taken over by my feature film Elfie Hopkins. It’s the other main project I’ve worked on for four years and the financing finally came together in January this year. We shot the film in March and it took over my life for about six months. It was an incredible experience but it didn’t leave time to do much else.

When the smoke cleared I got back to getting the doco out there. I organised printing some DVD covers and DVD and have been submitting the film to festivals around the world. As I mentioned in the last blog the plan was to first submit to festivals where we had contacts. I tried this and have to thank a couple of people who did try use their connections, David Krae and Shane O’Dell, but unfortunately so far we have yet to be accepted into any festivals. We’re at seven rejections and counting.

I’ll be honest, it’s a pretty disheartening process. Film Festivals are a world onto themselves and you never know what a festival is looking for. And from what I’ve learned alot of the time it comes down to if you have a connection with the programmer. Even knowing this after a few rejections I started to question the film I’ve made. I’ve tried to make something a bit different and that doesn’t have the traditional narrative. We always wanted to make something that would challenge the audience and force them to become engaged. It doesn’t have the “look how wonderful life is now” ending because that’s not the reality of the situation. Part of me thinks it will be hard to find North American festivals that would go for the film we’ve made. Maybe it’s just too different and I should have made something more traditional.  So all in all, it’s pretty hard on the ego and can be fairly brutal.

But I found something recently that gave me a boost. It was a note from a UN intern that was staying at the same boarding school we stayed at when we shot in Nairobi. His name was Oliver and he was part of contingent of young UN interns that were in Nairobi to decide the agenda for some upcoming meeting. He had struggled with why he was there in the first place. He thought it was an incredible waste of money to bring people from around the world to decide an agenda when the money could be better used elsewhere. It made him a bit of an outsider in his group. One day we brought him along with another intern to the HHF. He loved the experience and was overwhelmed by it. It reinforced in him even more what a waste of money the summit was and said so the next time there was a group meeting. He was definitely outsider after that. Before he left Nairobi, he left us this note which I’ve had ever since. It reminded me why we made this film and the story we want to get out there. I didn’t go into film for the money or fame. I went it film to tell stories that are compelling and entertaining and hopefully makes the audience think. So yes it is hard and I  know I’m going to have plenty more rejection but I’ll keep pushing on. We’ll get there in the end!

Thanks as always for your support. 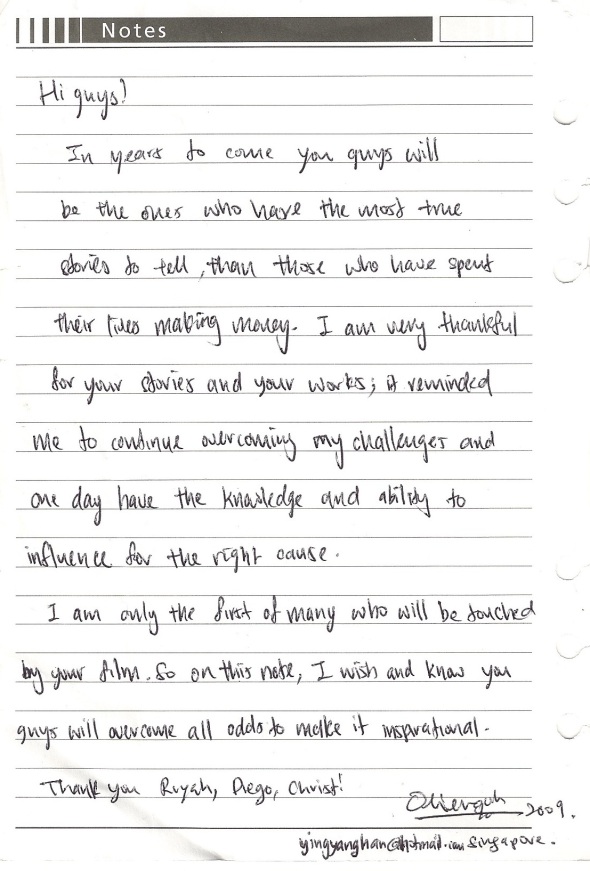 This entry was posted on November 8, 2011 by Riyad. It was filed under BLOG .